This is one form of the Brooking Arms.

The gold scallop shell above the crest is usually considered to be a symbol of pilgrimage, and the blue crescent there-in is often used as a mark of difference denoting that the bearer is a descendant of the original bearer.

Other arms have been used by branches of the Brooking family, usually based on a similar shield with a different crest.

The following article was first published in 1998 in the Brooking Historian. It give a fascinating insight into the research (by Helen Allen) that went into identifying one of the Brooking Coat of Arms

THE SEARCH FOR A COAT OF ARMS or RESEARCH AMONG THE ARCHIVES.
by Helen Allen First published in April 1998

Over the years many people have searched for the Brooking Arms. I except 'B' branch, who had their own, but no one could find. where it came from. But delving into our archives, I come across so any. different references to it, from Australia, New Zealand and here at home, that I have tried to bring together all the information we have.

I will be making constant reference to the Family Roll of Honour, on the back cover of our journal. I expect Joseph Rowe Brooking (JB 4) tried in 1860 to find a coat of arms, and Joshua Brooking-Rowe (HVM 8} made a reference to it in his researches, and Arthur Brooking (JO 19) only mentions it in a minor way, but being of no interest to him. He has already worked out that his branch ‘J’ had little to do with 'B' branch - or so he thought. But there are a few indications that they are in fact related, although more needs to be done on this. ‘The first mention I can find is the will of Nicholas Brooking (BB 1), Armiger, died October 3rd 1666 aged 68. He was buried in St. Mary Arches, Exeter, and a Coat of Arms ; Crest is on his tomb, as borne by Dartmouth ; Totnes Brookings. ‘The Admiral used the same coat of arms with a scallop shell as crest, This last has been added by Mrs. Sanders, She is the first person where we have extensive discussion, and indeed search for it in the last century and overlapping into this, and Mrs, Marie Sanders is HR 5. We are lucky to have this archive, deposited in the Harry Ransom Humanities Research Center, The University of Texas at Austin. This was obtained for us by member Bob Brooking (ZABE3). Mrs Sanders archive was deposited by her daughter, ‘Ann Bridge’ (her real name was Lady Mary Dolling Sanders O'Malley (HR 16)), She took up her mother's research, and added to it when she wrote a book, 'Portrait of my Mother’. So, we have the will of Richard Brooking of Dartmouth, proved in the Archdeaconry Court of Totnes, 1663, This is from the Webber Collection. Because all these extracts are copied by hand from various different people, it is difficult to know whether the statement ‘Coat of Arms and Crest as borne by the Dartmouth and Totnes Brookings' is written by Mrs. Sanders. A note in tiny writing at the top says ‘Supplied by Mrs. Sanders and copied by A.B. Feb 19 1910, The Richard Brooking of Dartmouth is at present unidentified and could be branch B, D or even U, but I have also found an early Roope-Brooking marriage, which would indicate another Dartmouth Connection, the Roope's being one of the oldest recorded families in the history of Dartmouth.

This (Mrs Sanders/Ann Bridge) archive is a wonderful mixture of the detail her daughter went into to write her book, and her background deserves a mention, Her grandmother was Mary Brooking (HR 1) from Yelverton, a ‘Plymouth Sister', a very strict religious sect. Her mother, Mrs Marie Sanders (HR 5) was an American. The Sanders family came from Tavistock, and were wealthy, owning tin mines. But Mrs, Sanders’ husband, James H (HR 4), suffered a stroke which destroyed his judgement, resulting in the loss of most of their money, One of his 'firms' was called Rio Tinto Co.- was this the forerunner of our present day Rio Tinto Zinc?

The Yelverton connection is a new one, although there are very old archives. listing a Brooking at Buckland Monachorum in the 1500s. Then I found out that their house was called Yelverton, and it was near the Rock at Roborough. The railway ran through part of the grounds, although it was screened by trees. 1 can hardly remember this railway, although I must have travelled on it to reach Whitchurch during WW2 where my sister-in-law was living. The nearest family church to ‘Yelverton’ was Meavy, although their main one was at Buckland Monachorum,

According to Ann Bridge, James Foster Brooking (HO 2) lived at ‘Yelverton’, There is a slight mystery here, for it must definitely have been the name of the house only, as Yelverton did not come into use as a place until the arrival of the railway, being formerly ‘Elford Town', The railway arrived in 1885 and James Foster Brooking died in 1840!

Mrs Sanders must have also got in touch with Mrs, Sarah. W. Young. (BS 15) "Mrs Sarah W, Young née Brooking of the Nicholas Brooking side (i.e. Branch 8) has helped me enormously in ay searches", Portraits were given to Mrs. Young by Miss Bertha Brooking, (BIA 14) daughter of Rev. Nicholas Brooking (BIA 1) of Ipplepen.

Mrs, Sanders also corresponded with Albert Brooking (JB 22) and mentions that in 1621 Nicholas Brooking of Exeter paid £200 to purchase land in Ireland. This was trying to ‘link up’ the reference to Anthony Brooking being born at Bandon, Cork, Eire, something which is quite another subject, and has no place here. Other members of the family Mrs. § mentions are the Rev. Augustus Elworthy Brooking (HT 3) and Sir Harry Triscott Brooking (HP 14).

There is talk about Admiral Samuel Brooking's (HC 21) seal which is the coat of arms the Admiral used. The motto is Crux Fidei Calcar. Rev Augustus gave to my husband James Harris Sanders the Admiral's silver snuff box, purchased by his father (Admiral Samuel's) Uncle Joshua Brooking at the sale of his mother's goods after her death...it bears the crest. Rev Augustus also gave my husband an old embroidered picture of the Admiral's arms, very worn,

Mrs. Sanders goes on to describe it:- fesse wavy - cream coloured; i.e. the groundwork of the shield is the same. The fesse is delineated with five thin blue lines, two mark the outer edges of the fesse, and three run parallel with these from end to end, Six cross crosslets are red, three above and three below the fesse as they should be. It appears that the coat of arms as the Admiral used it is like some old seals on a few old Brooking wills at Exeter. Mrs Sanders then goes on. Foster's ‘Feudal Coats of Arms’ gives Sir Kalfte Brooking as named in the Arundel Roll (Henry VI reigned 1622-1681). Foster's book can be seen at the British Museum Reading room by anyone with a reader's ticket. Both crest and coat of arms indicate a crusader. The scallop shell a pilgrim, the fesse indicates a crusader’s sash. The cross crosslets indicate a crusader. I think this is referred to in Marshall's ‘Naval Biography’, in the sketch of the Admiral's life, and that mention 1s somewhere made of estates formerly called by names of places in Palestine. {There are other references to ‘estates in Devon and Cornwall, Palestine; Judea etc.)

I was told no Brooking arms were recorded at the Herald's College 1.€. College of Arms in London, but when I applied there in 1904 I was told the '‘last' entry of the Pedigree was made in 1838. Of this I had a copy made. (This is the one which is on the outside of The Brooking Family Historian.) Jt was a short Pedigree of four generations of John Savery Brooking (HX 10) and a coat of arms and crest. I understand it was a grant of arms to him. It was the Brooking arms much altered. Instead of six cross crosslets there were but four, the middle ones being replaced by clover leaves vert. The shield was Argent. The fesse divided; the left half azure; the right half gules. The crest was a scallop shell or (gold), surmounted by a crescent azure. Motto: Crux Fidei Calcar, Mrs Sanders went on to meet John Savery Brooking when he lived at Hyde Park Square, but by this time he was old (1873). I find it interesting that he took out his coat of arms in the same year as his only son John Bell Brooking (HX 13) was born.

Mrs Sanders goes on to say. Jo return to the coat of arms. I did not have a search made at the Herald's College for any earlier registry of Brooking arms or grants of arms. They explained to me that failing a registered grant, even if a person could prove his absolute right to use a coat of arms, the Herald's College would not give him a grant of those arms, As they expressed it ‘They are not ours to give'. But they would give a grant of a similar arms with a difference. Many old families have never had their coats of arms registered at the Herald's College. Indeed, the very old ones were in use before the Herald's College existed and before the visitations of heralds were instituted. The heralds announced their visits beforehand and called upon all bearing arms to present themselves. The old families felt sure of their right to arms and often did not comply and resented the call and subsequent expense. It is only safe to say that the oldest armigerii (those entitled to bear arms) are those most often omitted from the records. It is the custom now for heralds to say no one has a right to arms unless registered at the Herald's College. In proof of the fallacy of this, Henry VIII gave his illegitimate son a magnificent achievement of arms which is not entered at the Herald's College. The great Dugdale was most outrageous in some of his visitations. If the old families failed to present themselves at his bidding he even tore down their hatchments in the churches, as Charles II gave him power to do.

So there we must rest for the moment. 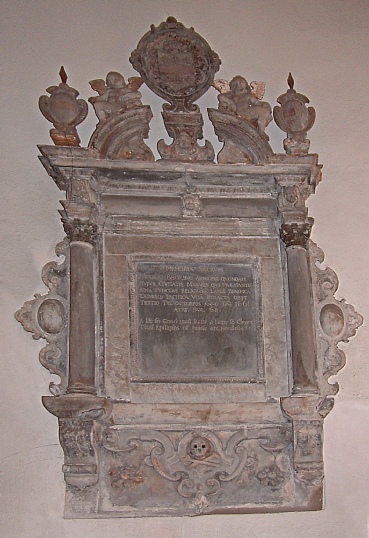 THE TOMB OF NICHOLAS BROOKING, AT ST. MARY ARCHES EXETER.

The inscription, which is in Latin translates as:- In Sacred Memory of Nicholas Broking once prominent Esquire (or Armiger) of this city who outstanding in piety author of most generous benefactions departed peacefully from active life on the 3rd day of October 1666 aged 68.

From top to bottom.

Scallop shell of St. James. Usually considered a Pilgrim’s symbol, dating back to the crusades. Helm :- facing this way a gentlemans or esquires. Cross Crosslets.

There are over 300 versions of crosses. Trefoil:- resembling a clover leaf. Fesse Wavy. Drawn across the middle of a shield, dividing it.

Motto
CRUX FIDEI CALCAR.
THE CROSS IS THE SPUR TO FAITH. 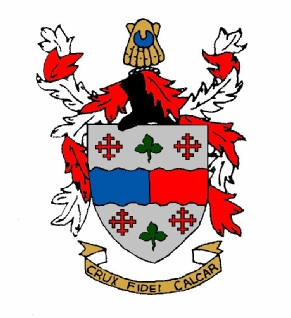